During that second day at the 26th Chaos Communication Congres at Berlin, I choose to make it a manual and active day : Jimmi P Rodgers, a friend of Mitch (the inventor of the TVBGone) brought an electronic kit called “LOL Shield for Arduino“. It’s a 14×9 led panel, either green or red, driven by an Arduino, a microcontroller board with an Atmel 328, and a USB/Serial converter, which make it very easily programmable.

Let’s go for a small demo, source and video …

After something like 2H of soldering (126 leds and 8 resistors later…) on the LOL Shield, I was happy to obtain the scrolling led view that Jimmie programmed 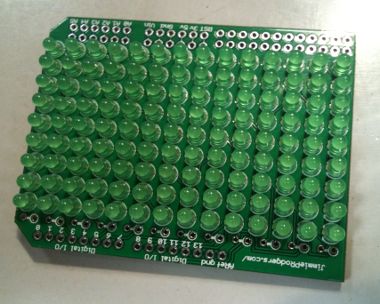 Since I always like to program things, I quickly installed the arduino development kit and compiler chain. 30 minutes later, I created a text-scrolling application…

The day after, I created a pong program, the so-famous game from the 80’s…

As Jimmie sources are open-source (GPL if I remember well), I also published my text scrolling program and pong game below.

Finally, let’s end with a small home-made quick and dirty video showing the history of this board :

The pong sources, version 1 & 2 : version 1 is an “autonomous” version : the rackets move all by themselves and the score grow up from time to time. Version 2 requires a variator plugged into the 5th analogical input of the Arduino. With this variator, you can play the right player role. The intelligence of version 2 is also less perfect, so that a well-trained human-being can play and, sometimes, win :). Thanks goes to Aurélien Couderc for the contribution regarding scrolling scores.

Here are the sources :